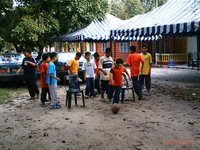 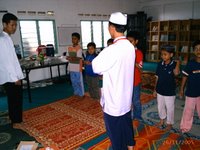 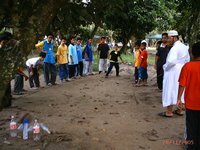 [In the Name of Allaah, the Compassionate, the Most Merciful...]

Know that the people of these later times have made confusing statements about his math-hab (Imam Muslim's). They have made contradictory claims in this issue, some of them saying he was a Shaafi'ee, others claiming he was a Hanbalee, among other claims, just as they have differed over the math-hab of al-Bukhaaree, the other authors of the six books, among others.
This is all based upon what they have come to believe about the obligation of ascribing to one of the math-habs of the four imams - that this is upon everyone, even the greatest of the Hadeeth scholars. This is something that has been the source of tribulation for the Muslims in these later times, along with corrupt beliefs and deviations.

Verily the people had lived for a long time without being affected by this tribulation, when they would apply the statement of Allaah, the Exalted:

It was not known that any of them ever called themselves a "Bakree", or an "'Umaree", or an "'Uthmaanee", or an "'Alawee", or anything else, ascribing to Aboo Bakr, 'Umar, 'Uthmaan, 'Alee, or the other major Companions, may Allah be pleased with them all. Likewise was the case of the taabi'oon, and this continued until the time after the advent of the four imams. It was then that the people began to ascribe to them, while those imams had warned the people not to make taqleed, blindly following them, except in times of necessity.

One of them (the advocates of taqleed) even said - and what a bad statement it was:

"And it is permissible to blindly follow other than the four, for someone in a time of need, and there is leniency in this."

And the author of "Maraaqee as-Su'ood" even said - and what a bad statement it was:

"And what is agreed upon today is the four, and following others is something that they all forbid."

To Allaah we belong, and to Him we shall all return; and there is no ability or power except through Him, and He is the One whose Assistance we seek against those who oppose the math-hab of the best of the Ummah.

This is something that is to be discussed elsewhere, so let us return to the subject at hand:

Know that Imam Muslim, may Allah have mercy on him, was a mujtahid imam who was focused on the texts (of the Book and the Sunnah). What the blind followers have been made to believe, that he was on a particular math-hab, is only the result of his position corresponding with that imam's position sometimes, a result of their agreement on the meanings of those evidences, or perhaps due to him learning that ruling from him, or from someone who learned it from him. If this is something that establishes blind following (taqleed), then we must conclude that ash-Shaafi'ee himself was a Maalikee, since he learned from him; and that Ahmad himself was a Shaafi'ee, since he learned from him, and so on. These people (the taqleed advocates) do not say this, rather they reject such a claim.

All of this (Imam Muslim being a blind follower of a particular math-hab) is disproved by the fact that he would oppose the imam (that people have said he made taqleed of) in other issues, and it is well known that the blind follower never opposes his imam.

And the truth of the matter is that he was upon the math-hab of Ahlul-Hadeeth, not a blind follower of anyone. He was like ash-Shaafi'ee, Ahmad, and the other jurists (fuqahaa') of the Hadeeth scholars.

Aboo 'Abdillaah al-Haakim, may Allaah the Most High have mercy on him, had done well when he listed him among the jurists of the scholars of Hadeeth. He then singled him out, writing a biography of him, like he did for the other imams, like az-Zuhree, al-Awzaa'ee, Ibn 'Uyaynah, Ibn al-Mubaarak, Yahyaa al-Qattaan, Ibn Mahdee, Ahmad ibn Hanbal, Ibn al-Madeenee, and others. Before thier biographies, he stated the meaning of having fiqh in hadeeth, saying in the 20th sub-chapter:

Knowledge of "fiqhul-hadeeth" - It is the very fruit of these sciences, and it is the basis of the Sharee'ah. The fiqh scholars of Islam, the people of analogy, opinion, deduction, debating, and researching, are well known in each and every era to the people of every land. And we will mention, with Allah's Will, at this occasion, fiqhul-hadeeth as taken from its people, to prove that the people of this science (Hadeeth), those who become highly proficient in it, are in no way ignorant of the fiqh of the narrations, since it is one of the varieties of this science (the science of Hadeeth). [2]

To summarize: Imam Muslim, may Allah the Most High have mercy on him, and the authors of the six books, and others, were the jurists (fuqahaa') of the Hadeeth scholars, acting by it (the Sunnah), calling to it, not giving any weight or importance to blindly following anyone, no matter who he was. They had no imam other than the Messenger of Allaah (sallallaahu 'alayhe wa sallam), the one that, by way of him, Allaah guaranteed the creation's guidance, and their success lies in obeying him and following after his way. Allaah the Most High has said:
( And if you obey him, then you will be rightly guided ) [4]

And Allaah the Most High has said:

And if their positions corresponded to the positions of some of the imams in some issues, then it is only due to some evidence that led them to that. Those who fall short in understanding the issue think this is due to taqleed, and thus they have labeled them with something that those far less than them in scholarship do not even deserve to be labeled with (taqleed).

TEST YOUR UNDERSTANDING
What was Imam Muslim's math-hab?
How would you refute someone who claims that all Muslims are required to make taqleed of one of the four imams?
How would you respond to someone who claims that Imam Muslim was a Hanbalee since he held the same position as Imam Ahmad in many issues?
Posted by ibn fadhli at 3:28 PM 1 comment:

Misplacing the Temple of Solomon 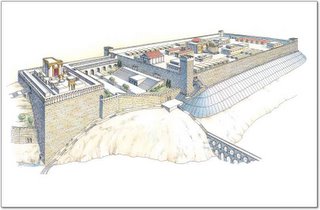 The book The Temples That Jerusalem Forgot is a result of the in-depth research of Dr. Ernest Martin that shows that the Temples of God in Jerusalem were indeed located over the Gihon Spring and not under the Dome of the Rock.
http://www.askelm.com/temple/t000601.htm
Posted by Seri Negara at 6:05 PM No comments:


"What happens to the one who leaves (apostates) Islam?"
ANSWER:Jazakallah khair and may Allah reward you for your question regarding those who become "murtid" (apostate from Islam): Your letter has caused me to finally sit down and prepare a complete written response this subject and it gives me the opportunity to also include this reply in our discussion boards on the Internet. [Jawapan Penuh]


‘Apakah Realiti Wahabi?’
Therefore we must reject this malicious label, and forget it completely. It is only used by those who wish to divide the Muslims into small groups. Imagine if instead of having one Ummah of 1.5 billion Muslims, we have "Wahhabis", "Hanafis", "Shafis", "Malikis", "Hanbalis", "Ibn Taymiyas", "Ghazalis", etc. etc. named after every Muslim scholar. The result would be the destruction of the Islamic Ummah. [berita penuh]


‘Al-Qurtubee, adh-Dhahabee and al-Albaanee on al-Istiwaa and al'Uluww’
Al-Qurtubee said concerning the saying of Allaah, the Most High, "Then he ascended (istawaa) the Throne" [berita penuh]